OFF WITH THE HEAD OF THIS GREAT QUEEN OF SCOTLAND 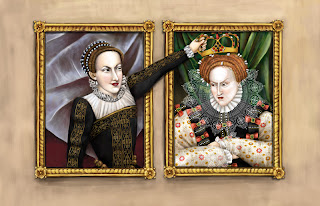 I have been struggling with creative (yet not too grisly) ways to show Mary Queen of Scots’s execution. Now, I am not saying being an executioner is easy with that whole black mask on your head and angry fishwives yelling at you, but Mary’s executioner really botched the job. It took three swings. Ouch. Two I can understand. But three makes you an Executioner School Drop Out.

Here is a sneak peek at a new painting. The illustration is for my next book, titled Royal Raucous, The True and Untrue Rumors of Royalty due to be release in 2008, Houghton Mifflin. I refer to it as tabloid magazine meets history lesson. I am shameless. I will pull any trick to make history fun for kids. Even grosse tricks. I want this book to be a gateway drug to history. Stand back Paris Hilton! Kids may think your life is exciting, but they never read about Mary the Stuart Drama Queen and the rumors that became her downfall.

Speaking of drama….tick tock. The dummy is due in two weeks and I have one area that I have been really struggling with. It’s the subtitle. It’s too long and I am not sure if it accurately describes the book. Wait a minute... I realize what is wrong with it. I have done it again. The Deadly Disease of the “OF” has struck my innocent story…of Mary. Make it stop.

I think I have Grammar Disease of the OF. of is word vomit. It even spews out of my mouth every time I sit down to type the blog of the month. Ugh . Isn’t it much clearer to write this month’s blog? Which brings me to my useless tip for the month…..

Off with the “of”. If any writers have stumbled on this blog, then I know you are shaking your head saying, “I never abuse the “of”. fess up OF junkies! We all abuse the “of”. So in memory of the great head of Mary Queen of Scots. OFF with her OF!

In your subtitle, the "of" is not incorrect, grammatically speaking. In fact, it may be a key factor in keeping the subtitle short. I'd sooner lose the "The" before I'd ditch the "of". For example:

I'm sure I could come up with a few more variations, but my coffee hasn't kicked in yet. But rest assured, your "of" is as proper as a queen's high tea (see definition 5a at http://www.m-w.com/dictionary/of).

As an editor, I'm proud of you for even thinking about these matters Many people just throw their hands in the air and leave it to the editors, then get royally pissed (har har) when the editor changes a word or two!