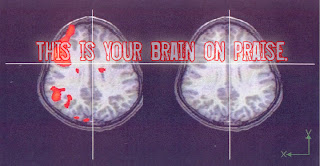 This article really captured my interest. Though I wonder how many anxious parents are now pulling out their hair, wondering if they haven't ruined their child with praise!

I'm glad to hear you're using more difficult vocabulary in your books! You're forging the path for the rest of us.