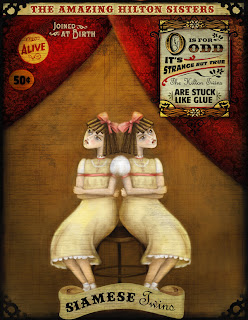 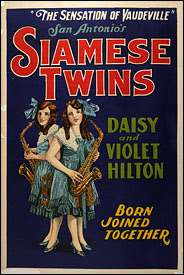 Source:
Taylor, James & Hotcher, Kathleen. Shocked and Amazed! On and Off the Midway. The Lyons Press, 2002
Posted by Bearded Lady at 12:34 PM

I absolutely love this illustration, Carlyn! Can't wait to spend more time looking at your blog and website.

ROCK ON THIS IS SO GOOOOD! I wanted to do a 'twin' piece for this because I have twin brothers, but they said no, it's too easy for you, you MUST challenge yourself. I am crazy about the -- feeling of historicity you achieved, the coloration, -- it truly resembles an old poster, and I love the story.

ooh, your work has such a dark, vintage feel to it. Fantastic details.

There are no known relatives of the Hilton (Daisy and Violet) sisters today.